In our daily prayers, Muslims recite this “Dua”: Attahiyat. To ensure that it’s correctly said, it must be spoken at precisely the right time in the final rak’ah. A comparison can help us better understand the meaning of Attahiyaat. Every good story, speech, article, or even meeting comes to an end at the end of the introductory note. As a meeting between man and his Creator, Allaah SWT, the culmination of Salah is warranted by this expectation. As a result, the final dua of the salaah is powerful.

Here is the Attahiyat in Arabic text,

The language of the attahiyat above has been translated: “All praise, adoration, and goodwill are intended for Allah alone. O Prophet, may Allah’s blessings and Peace be upon you! My prayers go out to all of Allah’s devoted slaves and to those of us who stand firm in our belief that only Allah and His Prophet Muhammad have the right to be worshipped.” 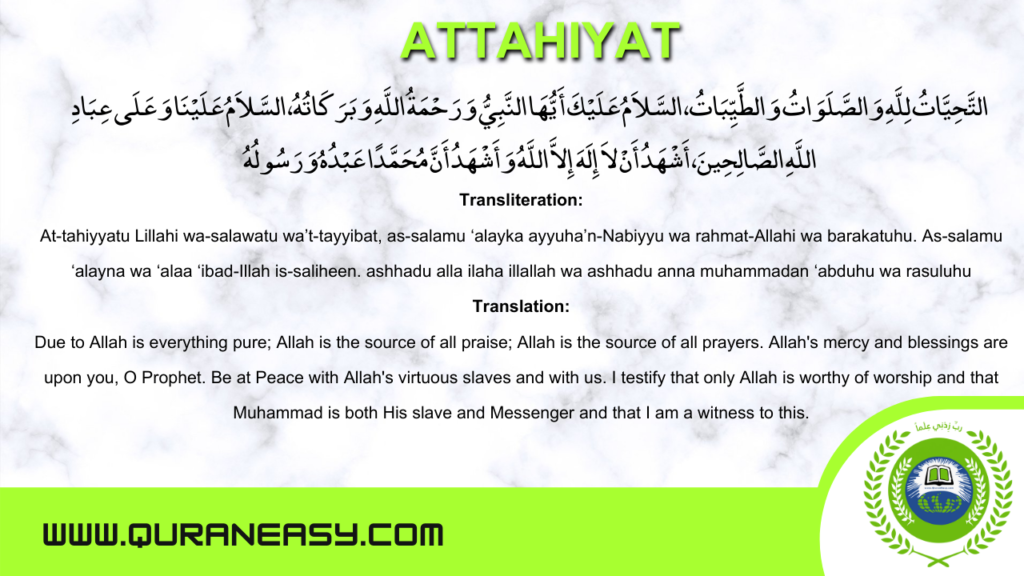 We provide one on one Online Quran Classes for kids and adults, In Ramadan we offer 30% Off and 3 Days free trial Classes
Click here to Join Online Quran classes now

Hadith on The Tashah-hud In the Prayer

In the company of the Prophet (PBUH), we would chant, “Peace be upon Allah, Peace be upon so and so” as we prayed behind him. We were once told by Allah’s Messenger (PBUH) that Allah is Himself and that He is Peaceful. Therefore, you should say, “All services performed by words and deeds of worship and all good things are due to Allah” whenever one of you sits during the prayer.” Allah’s mercy and blessings are upon you, O Prophet. Whenever Allah says this, it reaches every righteous servant in the universe, including those in the heavens and Earth. I swear that Muhammad is a servant and Messenger of Allah, and I attest that there is no God but Allah. Then he can make whatever supplication he wishes. 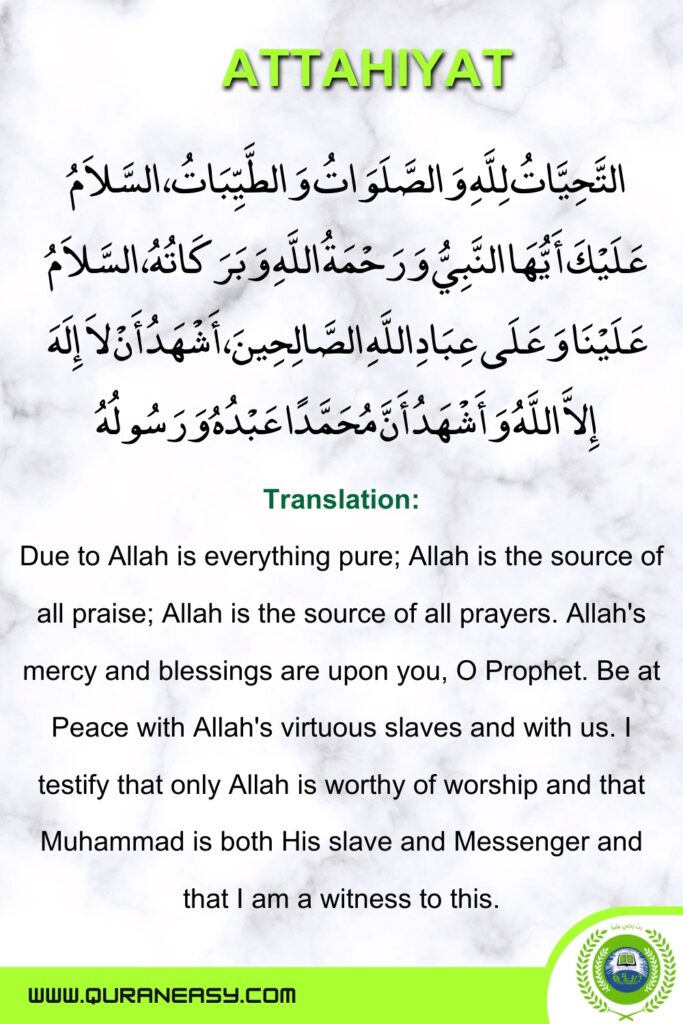 Why is Attahiyat in our Prayer?

SubhanAllah!!!!! Every person mentioned in this beautiful potpourri of salutations and prayers is referenced here. At every given time, Prophet Muhammad was always mindful of the people around him, their needs, and his quest to spread Peace and blessings.

I now understand the relevance of this discussion and Attahiyat in the daily prayers and Salah.

Both Allah and Rasulallah are the most magnificent examples that can be found (SAW). The beauty and perfection of Islam can be seen in the Quran, Salah (Namaz), Salah (Namaz), Zakat, fasting, and Adhaan. Neither another religion nor an alternative encyclopedia exists. Our blindness to the splendor of Islam in all its expressions is due to our failings.

We repeat the Attahiyat dua in our everyday prayers because it is significant in drawing us closer to Allah.

During the voyage of Al Isra and Al Miraj, the Prophet Muhammad (PBUH) had a discourse with God. But, no, he didn’t exclaim, ‘AsSalaam mu Alaykum,’ when he greeted his Lord… Allah is the source of all Peace. Thus we can’t wish Him well.

(All compliments, all prayer, and worship are for Allah)

(Allah’s Blessings and Peace be upon you, Prophet).

To this, Muhammad (PBUH) replied:

(Peace be on us and all good slaves of Allah)

*Note* Muhammad (PBUH) included “us” in his reply and on all good slaves of Allah.

And listening to this conversation, the Angels said: