8 Ramadan Blessings to Inspire You This Holy Month 2022

Another year, another great Ramadan 2022 month! It’s the ninth month of the Islamic calendar, and it’s the time of year when Muslims all across the globe fast from dawn to sunset to commemorate this sacred month. The Quran was revealed to Prophet Muhammad (PBUH) during the holy month of Ramadan, making it a particularly noteworthy month. What makes Ramadan such a special month for Muslims? Let us list the eight lovely benefits that this holy month of fasting has bestowed upon us.

1. The Act of Fasting

Fasting is a benefit in and of itself, since it is one of Islam’s pillars. A Muslim is shaped by the five pillars of Islam, which are guided by the Quran. During the month of Ramadan, Muslims are required to fast.

O you who have believed, decreed upon you is fasting as it was decreed upon those before you that you may become righteous. (Surah Al-Baqarah 2:183)

Fasting is a kind of self-control in Islam. During the month of Ramadan, a Muslim must fast from eating, drink, and sexual interactions, as well as refrain from negative thoughts. Fasting isn’t only good for your physical health; it’s also good for your emotional and spiritual wellness.

You will be rewarded for your patience and honest devotion throughout the month of Ramadan. During this holy month, you may earn these prizes by truly doing good activities and completing your obligations as a Muslim. Muslims who spend the majority of their time at the mosque during the holy month will be rewarded generously. However, because mosques have been closed due to the COVID-19 epidemic, completing your ibadah at home with your family during Ramadan has its benefits as well. Muslims who fast for the whole month of Ramadan and then for the six optional days of fasting in the following month (Syawal) would be rewarded handsomely.

The Prophet Muhammad (PBUH) mentioned, “Whoever fasts during the month of Ramadan and then follows it with six days of Shawwal (Syawal) will be rewarded as if he had fasted the entire year” (Narrated by Abu Aiyub Al-Ansari, Bulugh al-Maram)

The Shahadah, daily prayers, fasting, charity, and pilgrimage are the five pillars of Islam. It is good for Muslims to do such tasks, particularly during Ramadan, which includes going to Mecca for Umrah (minor pilgrimage). InsyaAllah, the benefits will pile up, and they will, in turn, draw up the route to Paradise in the hereafter.

Ramadan is a month of forgiveness as well as fasting. Allah SWT is the most merciful of all of his followers. Most Muslims would utilise this holy month to beg for forgiveness for the sins they’ve done in the previous year, whether deliberate or inadvertent.

The Prophet Muhammad (PHUB) mentioned, “Whoever observes fasts during the month of Ramadan out of sincere faith, and hoping to attain Allah’s rewards, then all his past sins will be forgiven.” (Hadith narrated by Abu Huraira, Sahih al-Bukhari)

The Door of Rayyan (also known as Ar-Rayyan) is one of the entrances of Heaven that is “reserved” for Muslims who fast throughout Ramadan. On the Day of Judgement, those who are really devoted to fasting throughout the holy month will enter via this door.

The Prophet Muhammad (PBUH) mentioned, “For those who fast, there is a gate in Paradise called Ar-Rayyan, through which no one but they will enter. When the last of them has entered it, it will be closed. Whoever enters through it will drink, and whoever drinks will never thirst again”. (Narrated by Sahi Bin Sad, Sunan an-Nasa’i)

This is a wonderful benefit since it impacts a Muslim’s afterlife and brings him or her closer to Paradise. In the hereafter, Allah SWT will reward those who are diligent and consistent in their prayer and Muslim duty.

How many of you have ever been too weary or sluggish to get up before daybreak to have your pre-dawn meal (Sahur)? I’m sure a handful of you have done it at least once before, with your parents always dragging you out of bed. Did you realise that every pre-dawn meal during Ramadan comes with a hidden blessing? Have Sahur since it is really a gift (Hadith narrated by Abu Dawud, Kitab Al-Siyam) From a religious aspect, Muslims benefit from seeing the beginning of their fast at daybreak while also conducting their Subuh prayers. From a medical aspect, Sahur (Ramadan Sehri) gives Muslims enough energy to last the whole day, preventing dehydration and physical weakness. During his fast, a Muslim should be active and lively rather than snoozing all day. If you’re looking for something to do during fasting, we hope this list may inspire you. 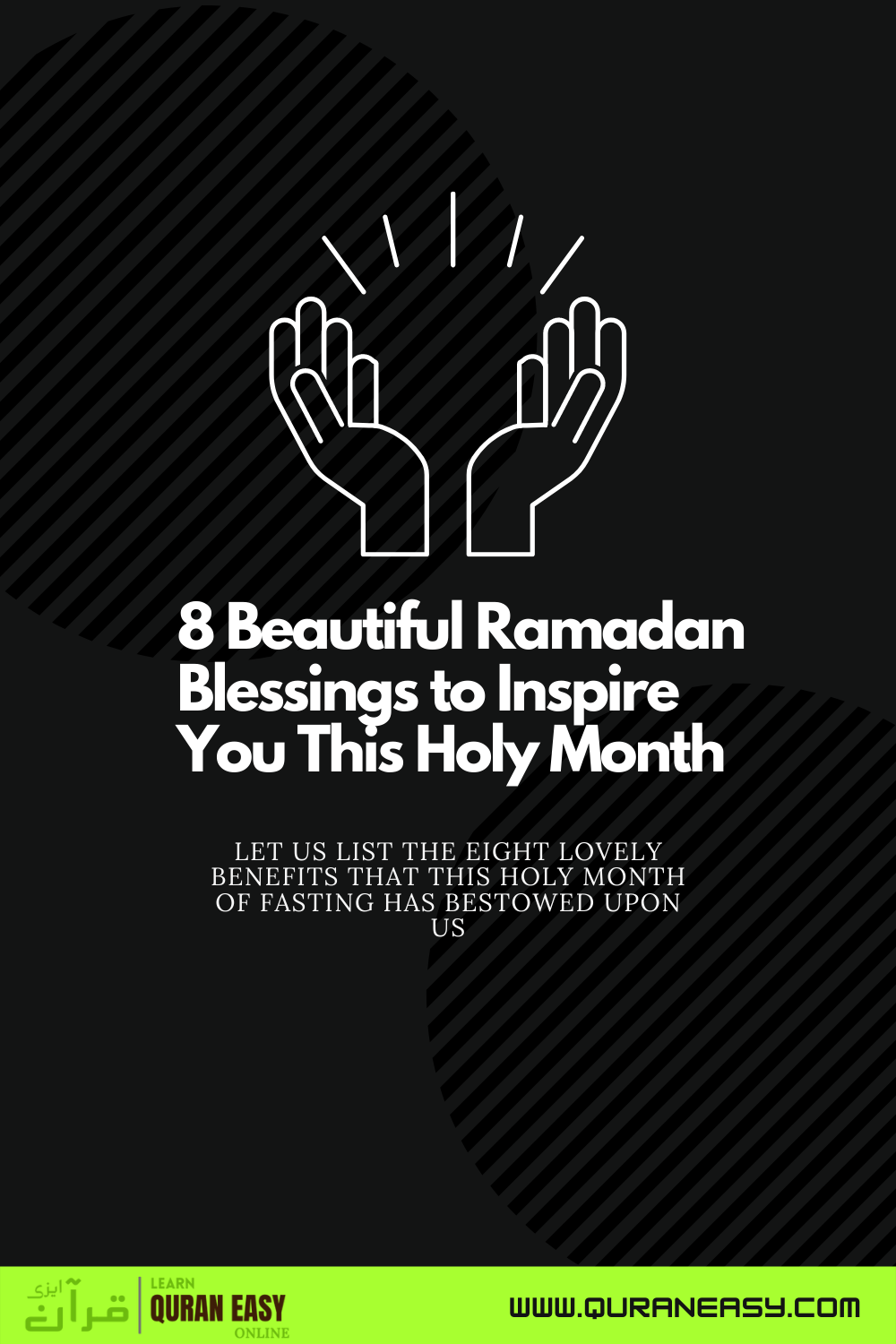 6. Breaking of Fast (Iftar) in Ramadan

Muslims who were fasting would break their fast after sundown (during the call for Maghrib prayer). As a Muslim completes a day of prayer to Allah SWT, the breaking of their fast for the day, or Iftar, is really a gift. There are two pleasures for the fasting person, one at the time of breaking his fast, and the other at the time when he will meet his Lord, then he will be pleased because of his fasting. (Narrated by Abu Huraira, Sahih al-Bukhari) Muslims are encouraged to eat their Iftar as soon as the call to Maghrib prayer is heard. The people will remain on the right path as long as they hasten their breaking of the fast (Narrated by Sahl Bin Sa’d, Sahih al-Bukhari)

Dates are referenced multiple times in Hadiths and the Quran, demonstrating their importance in Islam. It is recommended that all Muslims break their fasts with dates and milk or water, exactly as the Prophet Muhammad (PBUH) did. This is also to avoid indigestion, since you haven’t eaten or drunk anything for virtually the whole day.

The Prophet Muhammad (PBUH) mentioned, “When one of you breaks his fast, then let him do so with dried dates. And whoever does not find dates, then water,  for it is purifying.” (Narrated by Salman bin Amir Ad-Dabbi, Jami’ at-Tirmidhi)

7. Recitation of the Quran

It is only natural that Muslims commemorate the revelation of the Quran by reading words from the Holy Book throughout the month of Ramadan. Fasting throughout Ramadan would not be complete without some time spent reading the Quran.

It was in the month of Ramadan that the Quran was revealed as guidance for mankind, clear messages giving guidance and distinguishing between right and wrong. (Surah Al-Baqarah 2:185)

And we send down of the Qur’an that which is healing and mercy for the believers, but it does not increase the wrongdoers except in loss. (Surah Al-Isra 17:82)

8. Laylatul Qadr (The Night of Power)

Every month of Ramadan, the Night of Power or Decree (Laylatul Qadr) happens on one of the final 10 nights. The precise time and date have remained a secret to all Muslims, but as stated in the Quran, the rewards for your good actions and prayers on this special night will double immensely.

The Night of Decree is better than a thousand months.  (Surah Al-Qadr 97:3)

Muslims are encouraged to spend the last 10 nights of Ramadan (often overnight) completing different acts of devotion, such as extra sunnah prayers, staying at the mosque at night, and reading the Quran.