Salat-Al-Maghrib/ how to perform Maghrib prayer

When Does Maghrib Begin And When Does It End?

Every Muslim prays five times a day and night, and one of these prayers is Maghrib. It commences promptly after twilight and lasts for an hour and a half.

How many rakats are there in the Maghrib Prayer?

The Maghrib prayer has 7 rakats:

How to perform Maghrib Prayer?

Begin your performance of Maghrib prayer after sunset with three Rakat fard, reading Sana, Tauwwuz, and Tasmiya in the first Rakat, Alhamdu, and any surah from the holy Quran in the second Rakat, and Ruku and Sajda in the third Rakat. Do Qada Ula after Ruku and Sajda, and read Tashauhud, also known as Attahiyaat, and then stand up for the third Rakat.

Only read Alhamdu in the third rakat, then do Ruku and sajda, then perform Qada Akhrira, and read Tashauhus, Darud, and Duaa e Masurah in this qada, before performing Salam. Instructions for performing the Maghrib prayer step by step are given as follows:

Rather than being spoken aloud, the intention is set in one’s heart. We specify which prayer and the number of Rakats we will offer in niyyah.

We say Allahu Akbar (Mentioning Allah’s unrivaled greatness) while raising both hands to the shoulder or ear lobes. Then we position our right hand on the prime of our left on our chest. The location of the prostration drew our attention.

We provide one on one Online Quran Classes for kids and adults, In Ramadan we offer 30% Off and 3 Days free trial Classes
Click here to Join Online Quran classes now

The following words are used to seek Allah’s protection from Shaytan:

The Tasmiyah is recited as follows:

Then we recite the entire Surah Fatiha, including the Bismillah. Surah Fatiha must be recited in every rakah for Salah to be valid. It is written as follows:

The word “Ruku” means “to bow.” We must enter the bowing position after reciting Allahu Akbar and placing both hands on the knees. Take Subhana Rabbiyal Adhim, which means (Allah the Supreme’s Perfection is praised) three times. Look down to the sujood spot, keeping your head in line with your back (prostration).

We should straighten up and say: Sami’Allahu liman hamidah before rising and saying: Rabbana lakal hamd (this means that Allah hears those who glorify Him).

With seven parts of our bodies (the forehead, nose, and palms of hands, knees, and toes) should touch the ground while saying Allahu Akbar. When we are in sujood, we say the following three times: Subhana Rabbiyal Aa’la which means (Praising Allah’s Perfection). We keep our arms away from the sides of our bodies and the ground. During every sajda (sujood) performance, we are in the closest possible proximity to our Lord. As a result, we must make a sincere Dua and pour our hearts out to Him.

Tashahhud in the position of Qaida (sitting)

After finishing the two sujoods of the second Rakat, we recite the Tashahud with wording as:

After tashahhud, stand up again saying Allahu akbar, and perform the third and the final Rakat. In this Rakat, we only recite Surah Fatiha and then proceed to the Ruku without reciting any other surah. The Ruku and sujood are completed in the same manner as the first and second rakats. We recite the tashahhud again while sitting, as we did in the second Rakat, and then the Durood-e-Ibrahim as follows:

The three Fardh Rakats of Maghrib prayer is completed with the Taslim as:

After that, perform two rakats of sunnah, which is also important but not as much as fard, and read a surah in each Rakat of this Sunnah after Alhamdu.

Then, according to the Sunnah, perform two rakats of nafal.

Which Surah Should We Read During Maghrib Prayer?

In Maghrib, you can read any surah from Quran which you remember, but in the Sunnah, you should read any surah between Surah Zilzaal and Surah Naas. Because the Maghrib prayer is short, the Sunnah way is to read the short Surah during this prayer. 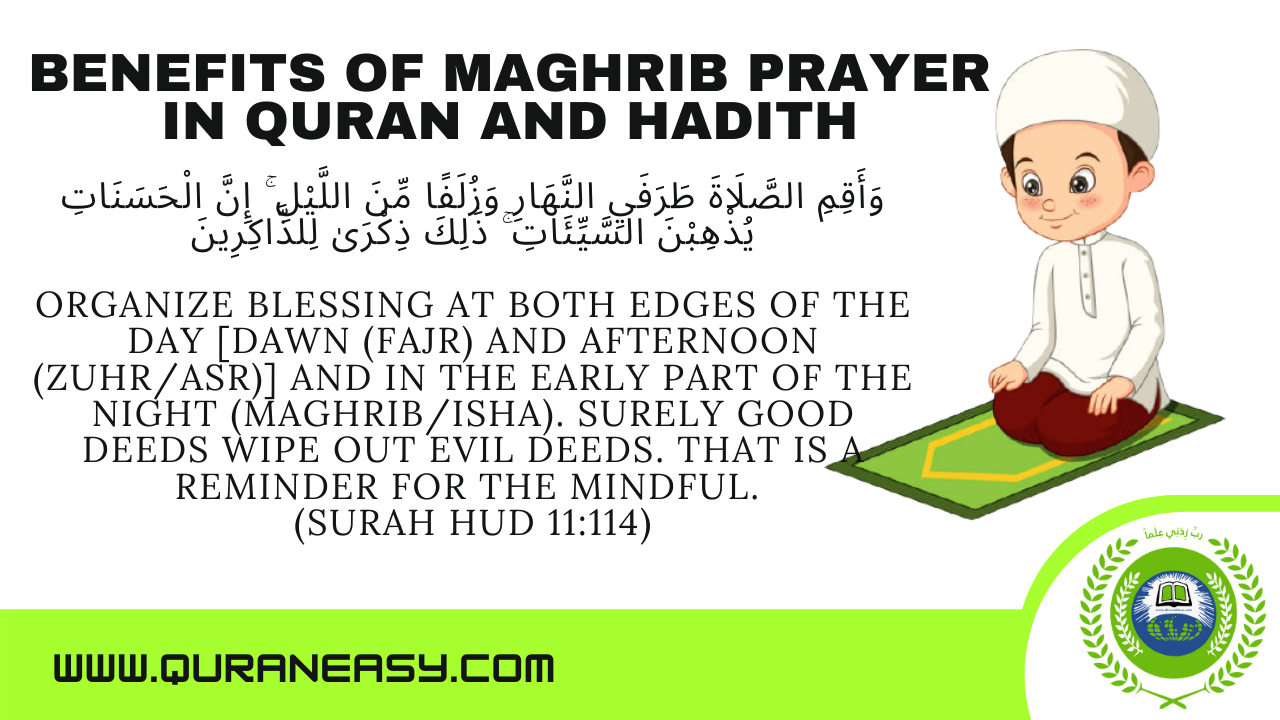 Benefits of Maghrib prayer in Quran and Hadith:

Organize blessing at both edges of the day [dawn (Fajr) and afternoon (Zuhr/Asr)] and in the early part of the night (Maghrib/Isha). Surely good deeds wipe out evil deeds. That is a reminder for the mindful.

On another place Allah said:

Establish prayer at the decline of the sun [from its meridian] until the darkness of the night and [also] the Qur’an of dawn. Indeed, the recitation of dawn is ever witnessed.

Maghrib prayer benefits are also mentioned in many Hadith:

‘My Ummah will continue to adhere to the Fitrah so long as they do not delay the Maghrib until the stars have come out.”

“The prayer most favored by Allah is the Maghrib salah and one who prays two more rak’ahs after it, Allah will build a house for him in Paradise where he will dwell and find comfort.”

“Do not be influenced by bedouins regarding the name of your Maghrib prayer which is called `Isha’ by them.”

“Read the two (Sunnah) Rak’ahs after Maghrib quickly as they are presented with the Fardh (prayer).”